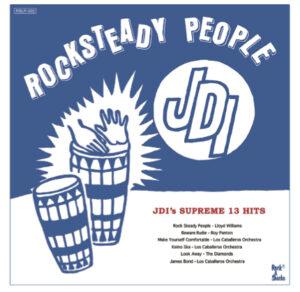 MASTERED BY HAV AT SF RECORDINGS STUDIO

Coply Freeman Johnson was not only a club owner, band owner and promoter of shows.  He also produced recordings on his JDI label.  JDI was an acronym for his main business, Johnson’s Drive-Inn, a restaurant, bar and nightclub that offered live entertainment at the corner of Chisholm and Maxfield Avenues, [2 Chisholm Ave] in Kingston 13 from 1956 until the mid 1960s.  The house motto,’Strike The Exclusive Average,’ adorned their advertisements.

Johnson’s Drive-Inn opened as a bakery and restaurant in 1953.  That was its identity by day.  By 1957, nights there were a major attraction, drawing crowds to see stars like Lord Fly.  “Lord Fly has been offered a north coast engagement but he isn’t taking.  He will remain with Baron Lewis at Johnson’s Drive-Inn.”  [The Star, Friday November 23, 1957. “With The Stars” column by Batman. Page 6.]

The house band, The Baron Lewis Orchestra, played Monday, Wednesday, Friday and Saturday.  According to “Batman,” “Spent a pleasant evening at Johnson’s Drive-Inn under the stars a fortnight ago.  Baron Lewis’ music spurs even tired feet to jive and mambo.  And sometimes proprietor Coply Johnson makes songs at the mike!”[The Star, Friday March 7, 1958. “With The Stars” column by Batman. Page 8.]

Guest artists included Roland Alphonso and “his tenor Sax.”  Alphonso was featured with the Baron Lewis Orchestra at Johnson’s Drive-Inn on June 21, 1958. 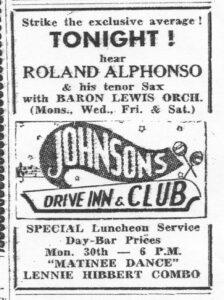 The next month boasted “Lennie Hibbert and his Combo along with Sheila Richards [sic] play and sing every Thursday for Johnson’s Drive-Inn Matinee Party.”  Superb singer Sheila’s surname is Rickards and she’s recently been the subject of a film, Shella Record: A Reggae Mystery.

After the Baron Lewis Orchestra, the resident band became the Trenton Spence Orchestra.  It was some time after the Spence Orchestra debuted at Johnson’s Drive-Inn that Coply began to plan another band, one he would recruit and sponsor to rival Byron Lee’s Dragonaires.  As part of his plan he organized, according to Roy Panton, “a postcard padding operation.  That was when we used stacks of postcards to vote for the band of the year.  We all spend a few hours writing Los Caballeros on the back of postcards before Copie mailed them in.  He wanted Los Caballeros to beat the Dragonaires for band of the year.  I think we came in second even after that!” [1]

Johnson owned Los Caballeros and subsequently The Diamonds.  That is, he controlled the names, owned the instruments, bandstands and uniforms and either did the hiring and firing or delegated it to a band manager he hired. 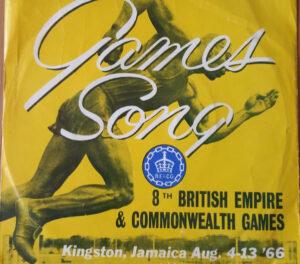 This is the first compilation of Johnson’s productions.  It includes the searing double sider “Beware Rudie”/“Control Your Temper” by Roy Panton and “Press On”/“Rude Boy’s Prayer by Desmond Tucker.  There’s also several instrumentals by Los Caballeros Orchestra, especially “Make Yourself Comfortable” and “Rigmarole.”  Shots from The Diamonds band include“Look Away” and “Expo ’67 (Silhouettes).”

JDI productions were made between 1965 and ’67.  Two can be dated to 1966 by their titles.  The first, “Keino Ska,” pays tribute to Kipchoge “Kip” Keino who won the mile and the three mile road races during the August, 1966 Commonwealth Games held in Kingston.

Johnson also produced the runner up song in a contest to promote the  Games.  His entry, “Hail To The Games,” was recorded by Desmond Tucker and Los Caballeros Orchestra.  Arranged by band leader Sammy Ismay, it was paired with the contest winner Lloyd Wilks’ “The Games Song,” on a Federal 7” 45 under the sponsorship of Coca Cola.

Child star and accomplished singer Jimmy Tucker performed with his brother Desmond before his talent led him to go solo.  Desmond moved on to The Hi-Tones vocal group with whom he wrote and recorded “Singing A Song” and “Going Steady” before he worked with Los Caballeros.

A fabled Coply Johnson production called “Every Day” was done in response to Joe White and Chuck Joseph’s smash hit “Every Night.”  According to Roy Panton, Johnson produced the song at Studio 1.

“It’s easy for me to remember that song and where it was done because that was the only recording I made at Brentford Road.  When I cut for Dodd he didn’t have his studio yet so everything was at Federal.  That tune with Rita Anderson [Marley] and me came out really well but I don’t remember hearing it much.  ‘Every Day’ was cut with The Cavaliers band in 1965 or early 1966.  The solo was by the sax player #1 [Percival ?].  I remember he had a goatee.  Coply know him from long time.  David Madden was on trumpet.  The Cavaliers manager then was named Sarge.  Lester [Sterling] left the band after the Dragon Stout contract run out and then David Madden take it over.”  [2]

The Cavaliers band was one of many groups changing leaders around this time.  Los Caballeros was another.  They changed leaders and saxophonists in 1966.

“That’s where I took over the band Los Caballeros led by Sammy Ismay – he was a saxophonist.  He used to work at the government printing office.  He died a few years ago.”  [3]

Sammy Ismay was an excellent tenor sax player and a former member of Kew DaCosta’s group at The Sugar Hill Club, Byron Lee’s Dragonaires and the Granville Williams Orchestra.  Ismay was instrumental in arranging and soloing on some of Clement ‘Coxson’ Dodd’s first productions for his Worldisc label.  Such as “King Spinner” and “Proof Rum,” respectively.”

Shortly after Karl “Cannon Ball” Bryan took over Los Caballeros, he learned he was going to lead a different band.  Singer Roy Panton explained how The Diamonds were “cut down from Los Caballeros, which was an orchestra.”  Other members of Los Caballeros that Bryan recalled were pianist Freddie Butler and bassist Helmsley “Ainsley” Coleman Morris.  Butler is the brother of notable keyboardists Leslie, Harold and Howard.  Kingston correspondent Roberto Moore has John Nelson on trombone and Hugh Malcolm in the drummers chair for Los Caballeros.

Karl Altamont “Cannon Ball” Bryan has a long and storied career as a musician.  Here’s how Jackie Estick, writing for The Star in 1964, profiled Bryan.

“The recent recording of ‘What Can I Do’ by Derrick Harriott, indicates that KARL ‘CANNON BALL’ BRYAN is probably the coolest and most distinctive alto saxophonist and clarinet player around today.  His alto saxophone styling of jazz numbers is somewhat similar to that of the late Charlie Parker, yet one can easily detect that unmistakeable air of originality in his playing.

KARL, aged 27, is the brother of clarinet player, Corporal Courtney Bryan, of the Jamaica Military Band.

Karl made his first approach to music when he was only 13 years old.  That was in 1950 when he started to practice the clarinet.  In 1954 however, he made a switch from the clarinet to the alto-saxophone and soon after that he was ready to make his debut as a professional musician.

In 1955, ‘Cannon Ball’ went off to the north coast, where he held membership with various orchestras such as the Rever [sic Redver] Cooke, Joslyn Trott, Stanley Hedlam and the Jerry Bindley Orchestras.  Later he started to introduce his own compositions and arrangements, which were well received.

In July, 1962, he moved his family to Kingston and joined CARLOS MALCOLM and his Afro-Jamaican Rhythms.  With the Afro-Jamaicans, Karl went abroad playing engagements in Miami, Puerto Rico, Trinidad and Tobago, Antigua, Barbados, Martinique, Montserrat and Venezuela.

Karl is planning to start composing and arranging songs on a big scale.  At present, he does arrangements for Jimmy James (now abroad), and The Zodiacs.

A lover of swimming, he is a daily visitor to the Bournemouth bath, to which he takes his son, ‘Cannon Ball’ junior, for his daily swim and other exercises.  In the world of jazz, the alto-saxist lists his favorite musicians as the late Charlie Parker, alto-saxophonist, Telonious [sic] Monk, pianist and John Coltrane, tenor saxophonist. [The Star, June 20, 1964.]

Members of The Diamonds, ‘The Band With The Sparkling Sound,’ were identified by singer Roy Panton as Boris Gardiner on guitar, Calypso Joe on congas, Patrick McDonald on guitar, Paul McCormack on bass, David Madden on trumpet, Headley Bennett on tenor saxophone, Karl Bryan on alto saxophone, Lloyd Delpratt on piano and organ and Panton & Lloyd Williams on vocals.  Their drummer was Wade Hampton.

In 1967, The Diamonds played concerts at the Bournemouth Club and the Jamaica Hilton Hotel for the St. Ann Police Ball on September 30.

Coply Johnson came from a well off and politically astute family.  His brother Millard founded the Peoples Political Party on April 16, 1961 to contest the status quo of the People’s National Party and the Jamaica Labour Party.  The PPP was named for the party Marcus Garvey formed in 1928 and Millard vigorously espoused the ideas and philosophies of Garvey.

Millard Fillmore Johnson was born in 1917.  He was raised in St. Catherine and became a barrister, a teacher and a pharmacist.  “His father ran a grocery business and a transport company.” (Page 86.)  After 13 years working and studying abroad in the United States, Canada and England, Johnson returned to Kingston and was admitted to the Jamaica Bar in January, 1959. (Page 87.)

He founded the Afro-West Indies Council in Kingston in August, 1960.  As Vice President of the organization he traveled to 5 African countries that year with Amy Jacques Garvey, widow of Marcus Garvey.

“In February, 1961, the outspoken Africanist led a throng of several thousand ‘mourners’ through Kingston’s commercial district to protest the murder (February 12) of Patrice Lumumba.” (Page 88.)

In 1962, the PPP fielded 16 candidates, including Johnson who contested for the West-Central-Saint-Andrew seat, then held by Minister of Home Affairs William M. Seivright.  All 16 PPP candidates were defeated.

The late producer Bunny Lee claimed that the name of the transport company owned by Bromley Johnson was the Magnet Bus Company.  Lee also stated that Karl ‘Sir JJ’ Johnson, the music producer, was Millard and Coply’s brother.  “Johnson’s Drive In was (owned by another one of his brothers . . .a kinda famous place . . .a restaurant and club up Maxfield Avenue right before the old Regal Theater.” [Bunny ‘Striker’ Lee, annotation to “Reggae Power,” Doctor Bird CD DBCDD062, 2020. By Noel Hawks.]

Among the singers and musicians who gave accounts of Johnson, The Diamonds band keyboardist Lloyd Delpratt’s stands out for its eloquence and heartical sentiment.

“Coply Johnson was a well cultured (by that I mean someone who would never swear or get rude or out of hand) decent, respectable and a very generous man.  A man of good character.  His musicians could purchase the goods from his bakery at a cheaper price and also the cooked fresh meals on the other side of the counter, and the integrity of the service was maintained.

He was an excellent piano player, who entertained the guests of his Club before and during the band’s intermissions.  Coply loved a wide variety of music, and his range of playing explains that.  He loaned me one of his ‘Organ Electronic Keyboards’ to take home.  I had it placed in my bedroom beside my bed.  The guys use to kid me about such idiosyncrasy.  He would take some of us musicians in his car on a road trip and courageously tell us personal stories that were so compelling, they could never be forgotten.  He was a very good looking guy.  Of medium build with an inviting smile that made one feel comfortable being around him.  He was truly an icon.  He was someone I admired.

I was featured on one of his musical productions playing the song “Mercy Mercy,” written by Joe Zawinul of the Cannonball Adderly Quintette.  It was recorded under the band leadership of Karl Bryan.  [“Mercy Mercy Mercy” 7” 45 on the WIRL label by Cannonball Bryan And The Diamonds.]  He was loved by the people. He gave them kind words, he fed them and then gave them live music.  May his soul rest in peace. [Lloyd Delpratt, July 14, 2021]

Footnoted material excerpted from my unpublished biography of The Skatalites. 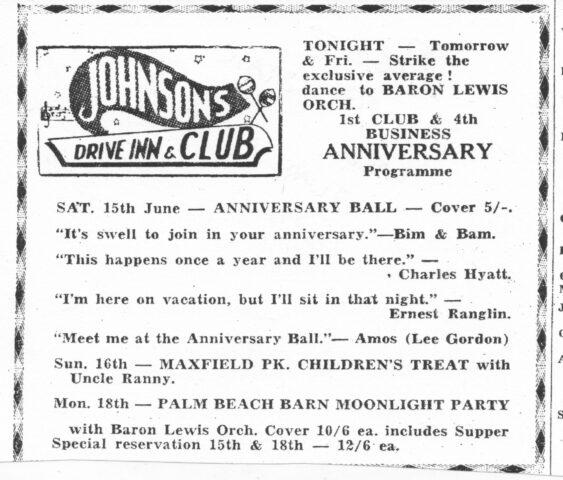 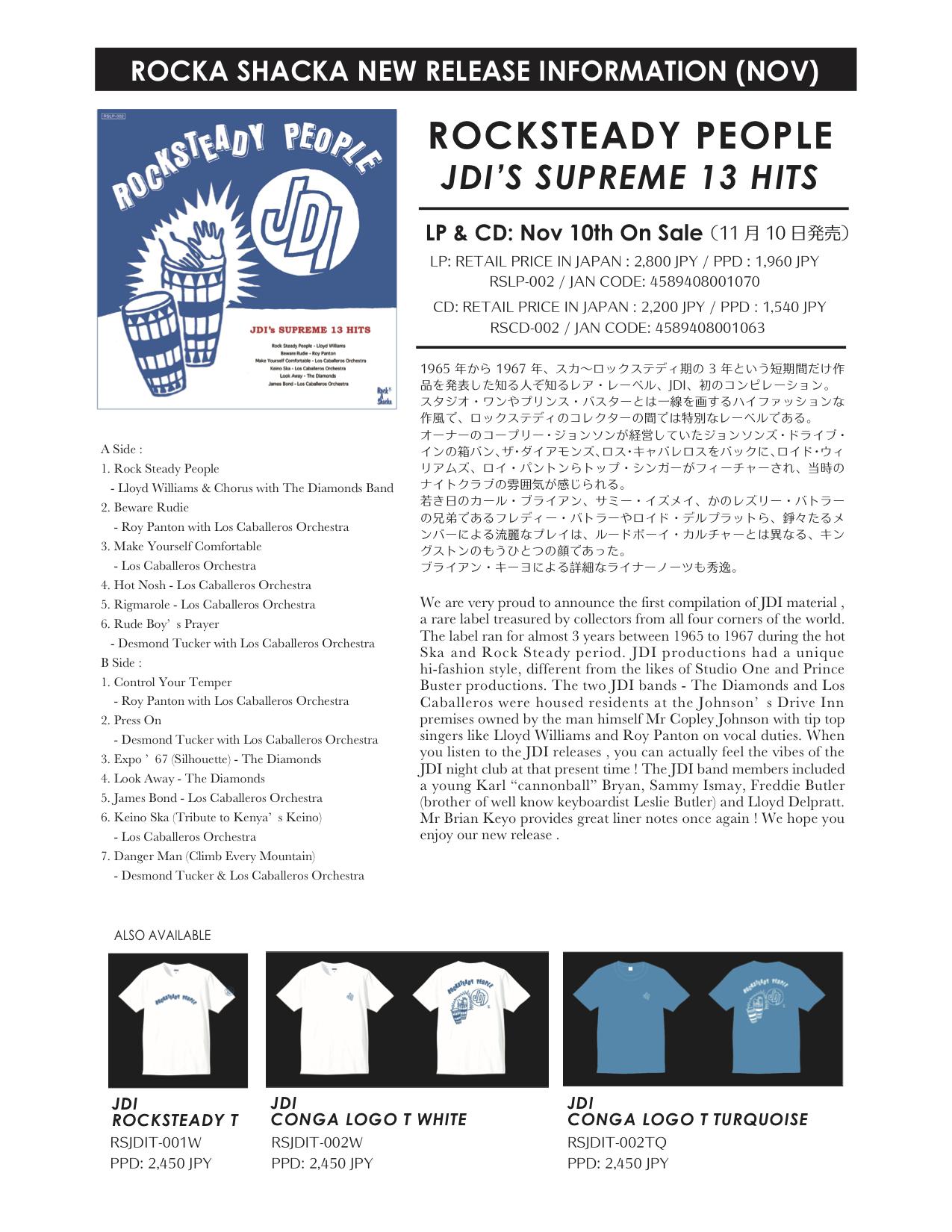