Whether getting an ice cream at Beverley’s, recording at Leggo’s, visiting Muzik City or Rockers International, shooting some pool or buying records from Prince Buster, singers, musicians and music lovers have long gravitated to Orange Street in Kingston.  The “music street” moniker was earned in the early 1960s when record shops and clubs proliferated.  A listing of businesses that operated on Orange Street gives a sense of why it was known as “music street,” and what prompted Roy Shirley and a host of others to sing about it.

One of the first record retailers in Jamaica was Leroy Riley’s Savoy Record Shop at 118 Orange Street.  The timeline for that address needs to be established and I could use assistance. Consider this business card kindly supplied by Sydney Robinson, grandchild of Henry Bartholomew Robinson.

H. B. Robinson moved to 107 Orange Street in 1956 and then over to 118 in the early 1960s according to Teddy Robinson who worked with H. B. on Orange Street. H. B. was later a member of The Jamaica Phonograph Record Retailers Association, which formed in 1967. When did Savoy start operating at 118 and did it overlap with Caribbean Distributing? Were they consecutive occupants? Caribbean may have preceded Savoy based on some of the automobile items offered. During the 1950s the Savoy Record Shop advertised “Radio Repairs and Replacements.”  I think the latter portion may be referring to the boxes rented by Jamaica Rediffusion for receiving ZQI, first station on the air in Jamaica.  In 1958, Savoy either began sharing the premises or moved the business.  That’s because Watson G. Lyn, “sole agent for Luxor Radio,” took out a Notice in the Daily Gleaner on Wednesday, October 1, 1958 to inform his customers that, “I have removed from 111 Princess St. to 118 Orange Street.”

Lyn’s Radio Engineering sold records in addition to servicing, repairing and retailing radios. From #118, Lyn moved to #100 after a year or two. Their advertisement that included “Luke Lane Shuffle” ran on April 1, 1961 in The Gleaner. 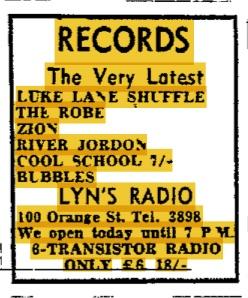 Here are some other musical enterprises encountered on a figurative walk down Orange Street in Kingston. A next early record retailer on Orange Street was Jack Taylor’s Hardware store.

Not sure if that was correct as Mr. L. O. Pottinger’s Tip Top Record Centre and later Disc Pressers Ltd. were at #37.  They were later Sonia Pottinger’s.

Olive Shaw’s Capricorn International label was at #40-42, and Seaga’s Travel Service, run by Edward’s father, was at #43.  Allied Motors Ltd. sold “the best gasolene, Oils, Accessories and Tires” from #45 from the 1920s through at least the 1930s.  Lyn’s Radio sold records and more from #118 before moving to #100 Orange Street, “3 doors above Parade” as they advertised, by April, 1961.  In 1974, they moved to #89 Orange.  #100 was also used by Roy Shirley as well as for distribution of Leggo’s Records and the Blue Ribbon label of producer Frederick Bell.  Magnet distributed records from #91.  According to the late singer Winston Samuels, his uncle operated The Rolando Hotel And Bar at 101 Orange Street. There were many musical guests who occupied the second floor rooms there, including Millie Small and Phillip and Lloyd of The Blues Busters. Bunny Lee had his Agro Sounds shop, short for his band, the Aggrovators, at #101 in the mid 1970s.

Mr. Pottinger’s Tip Top Record Centre started at #103 before it moved to #37.

Record Distributors Ltd. operated from #103 during the mid-1970’s. Caribbean Record Distributing and Robbie Robinson’s E & R Records both operated out of #107.   Later, Phil Pratt’s Sunshot was at #109.  After that it was the Jazz Hut retail shop during the early 1980s.  Jazz Hut later occupied #126.  Esther or Eric and Dorothy Barnett’s Deltone was at #111.  Theo Beckford later took over the Barnett’s location at #111 and renamed it Sundown Record Shop. Next was the Pancho Burke Record Centre, Radio Sales and Service at #117.

But were they next after Savoy? CDC Records also utilized 118 Orange in the early 1960s.  Later that decade Pama Records Ltd. was hand stamped on blanks using  “118 Orange St.”  Such as on Derrick Morgan’s “Return Of Jack Slade.” But by the 1970s, George Boswell AKA Winston Holness AKA Niney the Observer operated out of #118.

Morais’ Studio of Photography occupied #121 Orange during the 1950s.  Prince Buster’s Record Shack opened at #121 after he moved around the corner from Charles Street.  He later moved down to #127 after purchasing the two story building.

Clancy Eccles shop, Clancy’s, was at #122 Orange. His father operated a tailoring shop nearby.  Trevor Douglas has owned Cash & Carry Records and Leggo Studio at #125, only the latter continues to operate.

In between Beverley’s and the Swaby family’s operations, #135 was the location of Inter-Continental Music, purveyors of Lloyd Campbell’s The Thing and Sounds Unlimited labels.  Lee Perry also reportedly had counter space at #135 during the 1970s.

Horace “Augustus Pablo” Swaby took over the location previously occupied by the Beverley’s ice cream parlour and record shop in the late 1970s.  Initially it was Pablo Record Ltd.  At some point during the 1980s, Pablo’s brother Garth began to run the shop and the name changed to Rockers International at #135.  The same address was also apparently the birthplace of singer Dennis Brown, in 1957.

Resuming our promenade, Coxson Dodd’s Muzik City was at #136d, phone number 23873, at the corner with Charles Street. Here’s an example of the hand stamp used with that location. It reads, “First with the Latest Foreign and Local Records Best . . .Instrument . . .”

The Orange Bowl Club, which the Skatalites and other top bands played, was located at #176C.

Another entity, whose address on Orange street is difficult to ascertain, is Unity Records, a second floor location.

Lee Perry’s Upsetter Shop was on the corner of Orange and Charles Streets.  A location celebrated in song by the Leo Graham led Bleechers with their “Check Him Out.”

Songs which celebrate the Musical Street;

• Beat Street – Lloyd Clarke [In his Vintage Boss DVD, Parapinto Boogie, The Lloyd ‘Paro’ Clarke Story, the artist explains that it was written about the first Beat Street, Maxfield Avenue. So called because of the sound system activity on that thoroughfare prior to the 1959 advent of 7″ 45 records.]

• Three Against One – Prince Buster

• Check Him Out – The Bleechers

Thanks to Roberto Moore of Kingston for confirming the address of Savoy Records.

Thanks to Sydney Robinson, grandchild of H. B. “Harry” Robinson, for writing with information and photos, including of her grandfather’s business card.

Respect to Sandra Lyn, daughter of the founders of Lyn’s Radio Engineering, Watson G. and Joyce Lyn, for writing with additional information and five sources.  Thanks and praise!