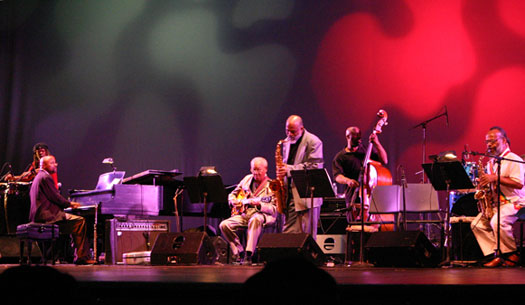 In Search of The Lost Riddim, the program sponsored by Harlem Stage and The Center for Jazz Studies at Columbia University, played to a near capacity crowd at Aaron Davis Hall in New York City on Thursday the 26th.

A “conversation” between Herbert Miller and four of the seven featured musicians was promoted to begin the evening. However, it was more a blurry slideshow with lecture by Miller, until he engaged musicians Ernest Ranglin, Cedric Brooks, Douglas Ewart and Larry McDonald. The “conversation” portion of the evening’s program was advertised to feature Cecil “Sonny” Bradshaw. However, in a phone call earlier this week, Bradshaw revealed that, “I’m not doing too well right now,” and that he was unable to travel to NYC for the show. The four musicians who covered for him entertained and informed their audience, despite not always answering the questions posed by Miller. Near the segment’s conclusion, Miller chose three audience queries, all of which were posed to Ranglin and Brooks. In his response to how his trip to Haiti with the Eric Deans Band in the fifties affected him, Ranglin revealed that Dean’s Band learned the Meringue during their three month engagement in Port-Au-Prince, and were the first band to bring it to Jamaica. He was privileged to meet American drummer Max Roach and Haitian pianist Ernest Lamy during this time in Haiti also. Ranglin replied “Cecil Houdini,” when asked what guitarist whom he’d listened to and aspired to play like. Houdini was a Jamaican guitarist who eschewed the pick in favor of his fingertips, according to Ranglin. In particular, Ernest recalled saying “Wow,” when he saw Houdini using both hands to play his version of “Sophisticated Lady.”

The second portion of the evening’s program moved the action from Theatre B to the larger Theatre A, with a capacity of 653. The musical portion kicked off at 7:45 p.m. after brief words from George Lewis of Columbia and introductions by Miller. Pianist Orville Hammond, bassist Wayne Batchelor and drummer Desi Jones augmented the four musicians who participated in the conversation.

The concert started with the Niyabinghi chant, “Never Get Weary/Holy Mount Zion,” featuring the Jamaican drum trinity of bass, funde and repeater, as well as Cedric Brooks on vocals. Moving into Mento, Jamaica’s first pop music, the ensemble sampled the first of three numbers recorded by Brooks or Ranglin, “Matty.” Then they perked up the house with a fine rendition of “Bridge View;” Roland Alphonso’s version of “Funny Money” composed by Victor Vanegas. Douglas Ewart took the first solo on alto sax, giving way to Ranglin, who rose up from his chair to pick it with vigor. Brooks on tenor sax took the final solo and carved his own path, foregoing Alphonso’s famous one.

It was back to the Mento for “Liza” and that brought out the flutes. The number began with Hammond blowing the theme before the band joined in. Ewart soloed, also on flute. “Wheel & Turn” was next and it was led by Brooks, who skanked his way across the stage while manipulating his tenor with aplomb. Hammond took the first solo on piano with the second going to Brooks on tenor. The audience was visibly and audibly moved during Brooks’ solo, with exhortations greeting his spirited runs.

Brooks introduced the next number as authored by Gaynair. “Ogetnom” Montego backward, was a straight up shot of Jazz with three solos. Brooks on tenor, Ewart on alto and Hammond on piano. At its conclusion, Brooks was taken to task by an audience member for not identifying which of the Gaynair brothers graced him with the music. He promptly cited Wilton, “Big Bra” to Bobby.

Douglas Ewart’s composition “Janice,” which he revealed as dedicated to his wife, was unusual in its reliance on flute. Ewart blew a prelude without accompaniment on what was a chamber-like piece until hand drumming began in earnest and propelled the number to a rousing close.

Then it was the time for the elder to assert himself. Rising to his feet again, Ernest Ranglin began picking out the notes to “Surfin’.” Originally recorded for Clement Dodd at Studio 1, this arrangement was closer to the one on his revival hit CD, “Below The Baseline.” The melody was given a vigorous reading by Ranglin’s fluid fingers, which slid rapidly over the frets.

By the next number, the audience could not be contained. A gentleman bounded up the stage left stairs and began to dance, or drop legs, in Jamaican parlance. Soon he was joined by second gentleman who came up the stage right stairs. The second gentleman was spry, and danced with more energy. He was whirling to his left, then his right and dropping splits while his hands touched the stage. Eventually the first gentleman departed and, to the delight of the house, the second gentleman continued to strut his stuff. They were introduced later as Persian the Cat and Mr. Castro, respectively, when it was revealed that both were “legs men” from the days of vintage Ska.

A number from Brooks, “Charge,” did so musically, with the tenor man up and about, running through chords. First solo went to Hammond on piano. Ewart took the second on alto sax and wailed on the high notes. But the fine solo by bassist Batchelor was the keeper, as he coaxed increasingly warm and lovely sounds from his upright.

Percussionist Larry McDonald, moving from his perch to a spot between Brooks and Ewart which he occupied when hand drumming, signaled the start of the final piece, the Mystic Revelation of Rastafari, or MRR Theme. Written by Brooks, who led the hand drummers on his tenor, it evoked memories of Count Ossie’s music. Brooks removed all pretense of dread with a spirited back and forth between his tenor and the hand drummers which led to an extended vamp until he one upped them with a quick half note blast, ending what had been a hilarious tit for tat battle. With that, he quickly split from the stage and did not return until most of the way through the encore, “Ball Of Fire,” which should’ve featured his tenor prominently. By the time he joined the band, dancers Persian and Castro were back on stage, shuffling and spinning, respectively. Ranglin soloed with verve and Brooks did also. It was unfortunate that the song had to end and thus, a thoroughly enjoyable set of music that spanned Mento to Jazz to Nyabinghi to Reggae to a final shot of the Ska. Whichever riddim was lost surely had been found! 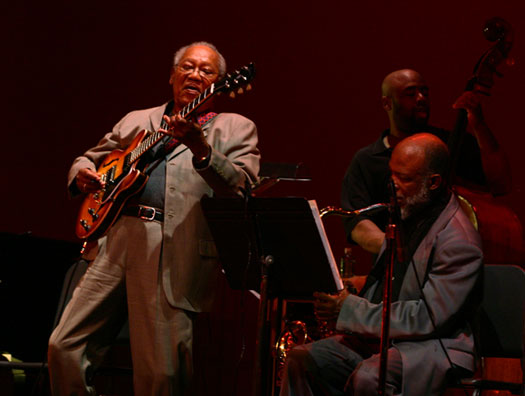 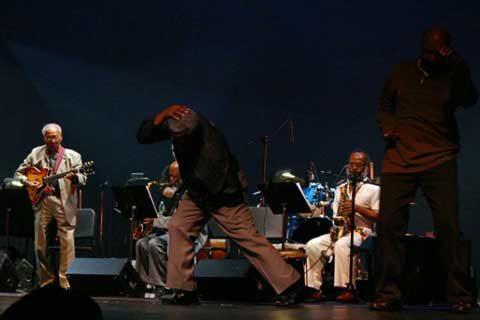 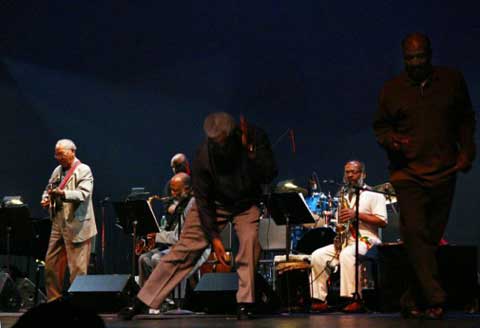